Yes, I am talking about… diapers! There are so many options these days that it is difficult for parents to choose what is best. I will go through a general review of these options as I’ve tried both disposable and cloth diapers and am currently trying a part-time elimination communication method for my daughter. 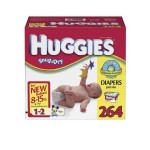 When my little girl came into this world, there was such a flurry of things going on that we naturally gravitated to the tried, true and very popular disposable diaper option. I’m talking about the Huggies, Pampers, Luvs, and multitudes of generics out there in the market. They were easy to put on, easy to take off, and a (mostly) safe bet that it will catch whatever came out of my baby’s bottom. We were also endowed with quite a few of these diapers as shower gifts, so there was no question — disposables were the choice at that time.

Around 6 months of age, my daughter began to gain the trunk muscles required to sit up on her own. It allowed us to move her from an infant reclining bath to the squeaking larger inflatable duck bath (which she hated at first by the way… but what baby doesn’t hate big changes). She acclimated to that change admirably. At that time, I was doing some researching online and happened to come upon a method called “elimination communication.” I thought, “interesting.” Further research into this method showed that it was controversial in some circles citing Freudian concepts that “early potty training” was detrimental to the young infant’s psyche and others including medical professionals that argue that babies are “just not ready” until they reach a number of milestones for potty training.

Again, there has been lots of miscommunication and misconception of many who have heard about this “early potty training.” I personally do not like calling it that. Potty training, in its entirety, certainly requires the baby to have a concept of: I need to go to the potty and sit on it to eliminate, I need to take off my clothes before I sit on a potty, I need to wipe my bottom after I eliminate, and I need to flush the potty (or tell mom or dad) that I’ve finished and put on my clothes. A child at 6 months of age… of course she can’t do all that! However, Elimination Communication (EC), in my opinion, is a segue into potty training in the future. It allows the baby to have a concept of using the potty, and if successful, saves many diapers and dirty bottoms along the way.

Many parents, when hearing that a parent is trying out EC, appear horrified and are concerned that the baby is too young, or that early training such as EC will create psychological damage in the future because of the “harsh training our parents used in the past.” I’m not sure we turned out so bad, though. In any case, EC is not about punishing young infants because they don’t make it to the potty or they don’t eliminate in the potty. I consider it merely providing them an opportunity to eliminate somewhere else other than his or her own diaper. 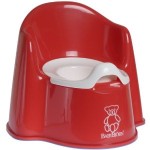 This Baby Bjorn Potty Chair was chosen for the high back, easy lift-and-clean system and dependable stability.

I decided to try this out part-time. I’ve read about moms who actually keep their baby diaper free to catch their “signs” about when they need to potty. I’m a full-time working mom who is unable to do such a thing. Plus, I like a clean house. So my adventure into EC started simply with, I’ll chose some times during the day to put my daughter on the potty and see what happens. My daughter almost always had bowel movements (BM) in the morning after her first feed of the day. It was almost a ritual; She’d finish her feeding and I’d place her in the “poop position” with her back propped up against my thigh and knees and her bottom sitting on my lower stomach/pelvis. Almost everyday, we’d produce a bowel movement like that and I was able to watch her facial expressions and listen to the noises she made to understand that indeed, she was having a BM. She usually urinated after naps, before or after feeds and before bathing and after the last feed of the day. Honestly, the urinating thing was very hard to catch on time. But the bowel movements? Since I’ve started, I’ve been 99% successful in catching her BMs in the potty. When she’s with grandma during the days when I’m at work, she has been about 75% successful with this. We were down to 4 disposable diapers a day. 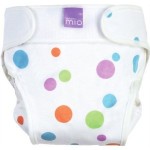 Then I decided, well… if she’s not really making BMs in her diaper anymore, why don’t we try cloth diapers? Urine is much easier to clean, and since we did laundry almost every day in the house, smell is certainly a non-issue. So I bought a small set (note: they were expensive!) of cloth diapers to try out. My daughter didn’t mind the change. Cotton was more comfortable for her little tooshie, but it was very bulky indeed! Cloth diapers are… just ok, I concluded, but I guess it’s more environmentally friendly.

Now we’re down to 1-2 disposable diapers needed a day – one for overnight and one when going out of the house. Wow!

How’s my daughter faring on the potty? One may wonder. From day one she was laughing on the potty. I gave her a toy to play with and held her in my arms most of the time to make sure she didn’t decide to lean over sideways. She loves the bonding time. If she was ever too tired and gets cranky or fussy the minute I put her on the potty, I will immediately remove her from it. If she sits for 10 minutes and… nothing… then it’s time to get off the potty. I never want her to associate the potty with punishment or unpleasant things. She successfully urinates about 1/3 of the time in the potty and almost always BMs in the toilet. I am fascinated and amazed by this whole endeavor. I see no psychological damage in my very happy and lively baby.

This is a genuine narrative of my adventure so far in the world of baby elimination. I hope you find some thoughtful ideas through this experience. I will be sure to update again when the real potty training begins and any trials and tribulations that come with it!